Remember all that talk about life settling down? Ha! This is adulthood; it never settles down!

I have now moved to Renmark! Except that I’ve only spent one day there in the past two and a half weeks, and we’ll probably be moving out in a couple more weeks! In the past three weeks, I’ve been to Adelaide, Melbourne, Geelong, Adelaide, Renmark, Melbourne, Renmark (for one hour), and Adelaide. The Hubby is coming down to Adelaide this weekend for Christmas shopping, so I didn’t bother going to Renmark this week. Maybe next week?

The Hubby is not happy with his job, and has been offered a new one by an old friend on Kangaroo Island. I’ll be moving to Adelaide full-time (yay!) and the Hubby will move to KI part-time. So you can probably imagine that I’m a bit knackered and relatively wound-up from all the change and travel!

As we were driving the 8 hours back from Melbourne last weekend, I was really tired and irritable. I tried to nap, but was too exhausted to fall asleep! With my eyes closed and my neck pillow cushioning my head, I found myself remembering elements of a guided meditation from my “Mindfulness for Dummies” book. I hadn’t tried meditating for a couple months, but it just seemed to happen. I focused on my breathing and the rhythm of the road, and though it wasn’t truly mindful because i let my mind wander a bit, after 20 minutes, I felt more relaxed and rested than I had in weeks. The irritability was gone. I felt a certain gentleness and compassion towards the world, which sounds super wanky, but is kinda the point of mindfulness!

The next day at my new job (which I LOVE!), I joined the weekly, pre-lunch, guided meditation. My coworker gently guided us through compassionate statements toward ourselves, then someone we love unconditionally, then someone we feel neutral towards, then someone we struggle to feel love for. Afterwards, the tension I normally carry around in my shoulders was gone and I felt at ease.

“Mindfulness for Dummies” warns us not to have too many expectations for meditation. The argument is that it’s a practice worth engaging in regardless of what you get out of it, if anything. And if we go into with expectations, we may be disappointed with the results and abandon the practice. I haven’t been meditating regularly at all, and when I have meditated, I haven’t always felt significantly different. But those times when I do feel better – less stressed, less anxious, less cranky – they make me want to keep practicing.

On a completely different note, here are some photos of knitting projects I’ve been working on lately! First we have the Knit Your Own Dog kit, in beagle variety. My sister in law gave me the kit last Christmas, and I figured it was about time to make some progress on it. I’ll do a separate post on how this all works out. 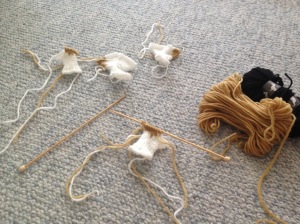 Next, we have the Honeycomb vest, a pattern by Sarah Castor for knitty.com. The father in law gave me this wool for my birthday four years ago! I started the vest about three and a half years ago, and it has been almost complete for over a year. All I needed to do was finish the ribbing on the neckline and armholes. Why was that so daunting?? 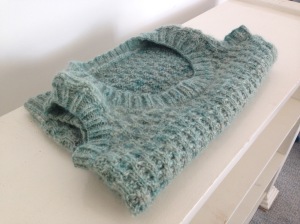 Next, we have a very special penguin. Jayne insisted that I make Clyde for her as a sort of apology/punishment for moving away 😆 Clyde is based on Anna Maltz’s Pinglewin pattern, from her gorgeous book, Penguin: a knit collection. Clyde is an albino penguin and he has knit himself a black hoodie so he doesn’t get stared at while at the shops. But for the moment, he is focused on cheering up Jayne and Richard and being there for them at a tough time. He’s a really good listener and loves a cuddle. (Sorry he/I missed your birthday, Jayne!) 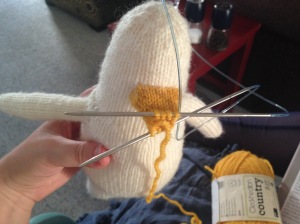 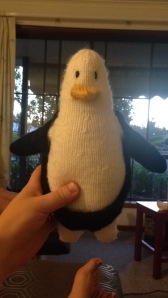